Cycling the Caminho Português 3 - From Coimbra to Santiago de Compostela

Januar 29, 2020
After the start in Lisboa and the first stretch to Coimbra (read here and here in German) I had to push hard at times when I cycled the Portuguese Way of Saint James to Santiago de Compostela - the Caminho Português. But it was worth it!

What I loved most about the Caminho Português: It gives you an impression of real rural life on the Iberian peninsula.

There were many great views, but not all  of the stretches were super stunning and instagramable. I passed little villages that were completely empty except for a few elderly inhabitants. 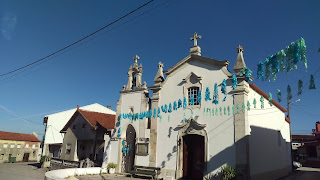 I also saw industry. And I saw endless eucalyptus forests that were surely not planted for biodiversity but for quick profit.


I guess, I just saw the real life.

A strenuous altitude difference had to be mastered between Coimbra and Porto. So I switched to a lower gear, stopped to pity myself and slowly slowly went uphill!

Alright... I never actually STOPPED the self-pity, but steadily made it to Porto anyway.


The Coastal Way from Porto to Caminha


Porto is a real beauty and the start of the nicest stretch of the Caminho Português: the Portuguese Coastal Way to Caminha.


This coastal diversion from the original way became more and more popular in recent years. 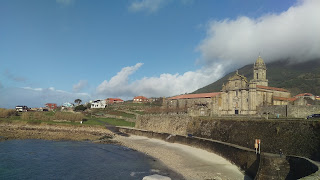 Most of the times I cycled directly by the coast, partly because I preferred the national roads and the cycle tracks over the official Coastal Way. Thereby, I also avoided annoying copperstone roads in the villages.

So if you are by bike, you need GPS tracks and/or a guidebook with recommendations for cyclists.


On my first day I illegally used wonderful wooden footpaths that connected the beaches. Nobody seemed to care because there weren't any pedestrians on that cloudy and rainy day in January.


Offroad in the forest

My guidebook failed to warn me from two short passages, each of them completely unsuitable for bikes. I had to push it over sticks and stones. 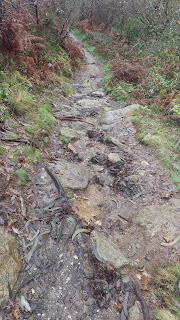 A hiking fellow pilgrim had to cautiously climb over the slippery stones in the forest. "Oh no," she complained. "I chose the Coastal Way to avoid THIS!"


A few metres later we were meant to cross a bridge that did not exist anymore. Unsuccesfully following the diversion signage, I ended up in a field in the mud.


Cafés that are no cafés

Every morning, I had my first "cha preto" (meaning "black tea" in Portuguese) in one of the many cafés that were actually no real cafés but more like bars. At least according to my definition.

The majority of guests were men. Thus, these sometimes quite shabby looking places reminded me a lot of Turkish tea houses (check out blog article in German).


The only difference was the consumption of beer and "vino tinto" ("red wine") even in the morning hours. Well, nothing can shock a German!

In the countryside I had lunch in very simple restaurants, together with agricultural and construction workers.

The chefs were always very kind and gave me something without meat. This usually included egg and salad, and always "patatas fritas".

Pilgrim Lena was even poorer. Being a vegan, she kept soy butter like a treasure in her backpack.

We met in an almost empty public hostel led by the municipality of Pontevedra in Spain where we chatted the whole night.

In January, the Caminho was super quiet.  From time to time I was the only guest in the hostels. Female pilgrims were rare.


However, the host in Caldas de Reis told me it would become very crowded in August. People would get up at 4 o'clock in the night just to get a bed in the afternoon.

When I finally arrived in Santiago de Compostela, I was overwhelmed by the number of pilgrims and tourists.

My journey ended in the Cathedral of Santiago de Compostela. The place's dignity suffered a little bit from the vast construction work going on inside.

So I walked through the church in the most dignified manner to celebrate the completion of the Caminho Português.

Ferry tales - Crossing the Black Sea on a cargo boat

September 03, 2019
Ferry facing Tschornomorsk in Ucraine.  There is real beauty in ferry rides: Sunrises over the ocean are stunning. And looking across the wide waters can be both impressive and relaxing. But ferry rides also offer a great deal of social awkwardness. I do love awkwardness, so of course, I do also love ferry rides. Getting to and fro in Istanbul by ferry.  "Sleepzone" on the Dublin ferry.  Absurd moments between two worlds  There is the moment when you enter the ferry from Calais to Dover for the first time in your life. You sort of look down on these rude people who dare to use the seatings in the restaurant as a kind of camping area. Everyone is lying down for a good night's sleep on the benches that - you believe - were made for sitting on a table whilst consuming food. Looking out of the window on my way to Patras.  And there is the moment when you get on the Holyhead to Dublin ferry at 3 o'clock in the night and you do the exact same
Kommentar veröffentlichen
Mehr anzeigen